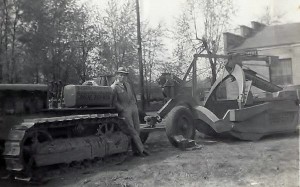 Don Gress Construction began in 1946 when Don Gress purchased an army surplus D-4 Caterpillar which had a winch but no blade. Don had just returned from WWII where he served in the Seabee's, the construction division of the Navy. While enlisted, he worked in the Pacific doing anything from unloading ships to building airstrips. He utilized this experience when starting the business back in Washington, Indiana.

Don's first job was pulling out tree stumps for a local farmer. Word quickly spread and Don was soon performing work for many area farmers. The business thrived as the government had just began a program encouraging farmers to build ponds, offering a $100 cash bonus to those who did so. This new demand
required the purchase of additional equipment.

From these humble beginnings, Don Gress Construction has grown into a successful business with an outstanding reputation for quality. The company has progressed with the community and has had the good fortune to have a major role in the construction of such local landmarks as Country Oaks Golf Course and the
Washington Sports Complex. The renovation of Baumert Lake was a personal pet project of Don's and the adjacent Don Gress Picnic Area was so named to recognize his efforts on that project.

Don Gress Construction continues under the principals it was founded on over 60 years ago. Don passed away in 1994. However, the business continues under Gress family management and ownership. Today the comapny is operated by Dan and Donnie Gress, Don's son and grandson. Linda Gress, Dan's wife, is also involved in the business as the office manager. They plan to maintain this family tradition for the next 60 years.